Recently, I had the great opportunity to talk to candidate Candy Rivas about her research on asthma in the lab of Scott Boitano, ( of the Arizona Chapter of the American Physiological Society, Principal investigator of the Academic Research Laboratory and Professor of Physiology at the University of Arizona). I created the following infographic to describe this research. Read on to the end of the post to see a video of my drawing this infographic.

My Infographic Services
Learn to Make Your Own

I was surprised to learn that more people are getting asthma nowadays than ever before. Even more surprising is that half of patients don’t have control over their disease. Current treatments are unable to help many patients with moderate to severe asthma. The work of scientists like Candy Rivas es on finding out why. In addition, asthma researchers are also interested in finding new treatment options that will help those with no options for therapy.

Their research led them to study a pathway that includes a protein called
Protease-Activated Receptor-2 (PAR2). Many allergens that cause asthma contain enzymes that break down proteins and activate PAR2 in airways and wreak havoc by causing inflammation. Because inflammation can make breathing harder, scientists became interested in PAR2. But
PAR2 actually has multiple functions that affect our ability to breathe. It can relax airways, a boon to asthmatics who have restricted airways. But because the protein can also cause excess inflammation, the relaxation that PAR2 is responsible for is not effective.

So, if PAR2 controls both the ability to relax pathways and make them more inflamed, can this be useful to treat asthma patients whose disease is uncontrolled?

A new molecule may hold the answer. This molecule, called C91, is the result of a scientific collaboration between the Boitano lab, including Candy Rivas, and the labs of Josef Vagner, PhD (Associate Research Professor at the University of BIO5 Research Institute, Director of the Ligand Discovery Laboratory, and Research Associate Professor of Pharmacology at the University of Arizona) and Theodore Price, PhD (Professor of Neuroscience, Program Head of Neuroscience, BS, and Eugene McDermott Professor at University of Texas at Dallas). C391 has shown promise in the lab. It inhibits PAR2, blocking its ability to activate. However, this inhibition blocks the pathway toward inflammation. This leaves PAR2 free to continue along the pathway toward relaxing airways. This is especially useful for a type of asthma that is triggered by an allergy.

C391 has shown promise in the lab. It inhibits PAR2, blocking its ability to activate. However, this inhibition blocks the pathway toward inflammation. This leaves PAR2 free to continue along the pathway toward relaxing airways. This is especially useful for a type of asthma that is triggered by an allergy.

It is still early in its testing in the lab, but C391 is a ray of hope for the future of treatment for patients with uncontrolled moderate to severe allergic asthma.

If you’ve read this far, I hope you’re interested in how I make my infographics. created this infographic in Adobe Illustrator. Below is a video timelapse from the original sketch to the final piece.

Get Your Infographic Today
Learn Today 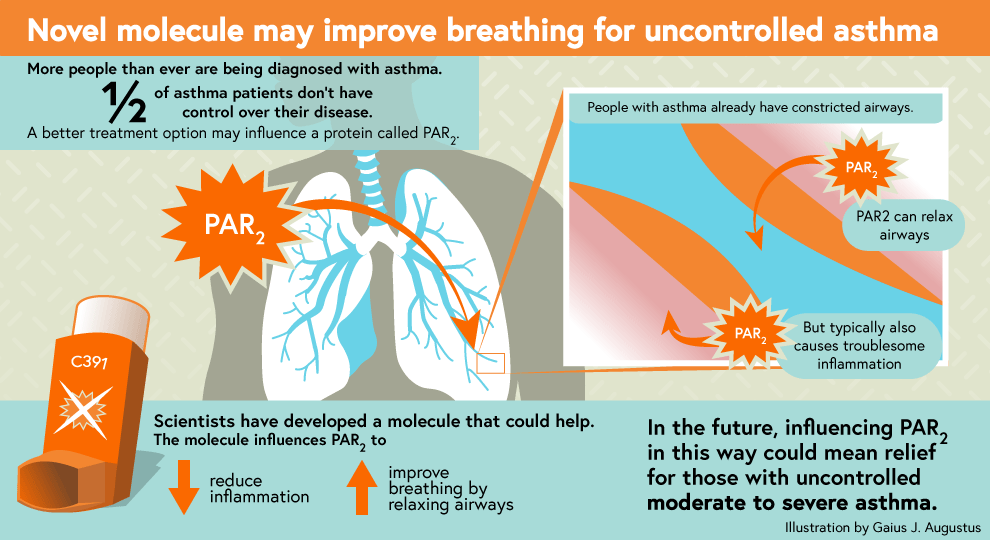 There is a lot of discussion in science right now about diversity (though not nearly enough). I’d like to focus today on, 1) how I define diversity and 2) what diversity does for science.

You must know your audience to create any form of visual science communication! Learn my go-to method for simplifying science for infographics.

In part 3 of this series on alternative careers in science, we’ll focus on science communication. From public relations to medical writing, get all the details.

It’s time to get started on making your first infographic!

Display fonts are tricky because they can sometimes be hard to read. Here’s a curated list of legible display fonts that you can use for your next project!

For most projects there’s a need to go beyond the obvious. This means we have to break free of common ideas and think outside the box.