Black Americans are more likely than whites to get colorectal cancer, but little was known about whether the microbiome of the colon differs by race or by colorectal cancer status (cancer free vs cancer). In this study, we looked at a class of bacteria known as sulfidogenic bacteria. These sulfidogenic bacteria produce hydrogen sulfide, a chemical thought to promote cancer growth. We found that Black Americans had more of the sulfidogenic bacteria than White Americans, despite whether they were cancer patients or not. In order to rule out diet and other common variables as a contributing factor, we corrected our statistical models for dietary factors, but this did not change the outcome.

I contributed the single and multi-variate statistical analyses to the paper as well as generated figures 1, 2B&C, and 4.

Colorectal cancer (CRC) incidence is higher in African Americans (AAs) compared with non-Hispanic whites (NHWs). A diet high in animal protein and fat is an environmental risk factor for CRC development. The intestinal microbiota is postulated to modulate the effects of diet in promoting or preventing CRC. Hydrogen sulfide, produced by autochthonous sulfidogenic bacteria, triggers proinflammatory pathways and hyperproliferation, and is genotoxic. We hypothesised that sulfidogenic bacterial abundance in colonic mucosa may be an environmental CRC risk factor that distinguishes AA and NHW.

Colonic biopsies from uninvolved or healthy mucosa from CRC cases and tumour-free controls were collected prospectively from five medical centres in Chicago for association studies. Sulfidogenic bacterial abundance in uninvolved colonic mucosa of AA and NHW CRC cases was compared with normal mucosa of AA and NHW controls. In addition, 16S rDNA sequencing was performed in AA cases and controls. Correlations were examined among bacterial targets, race, disease status and dietary intake. 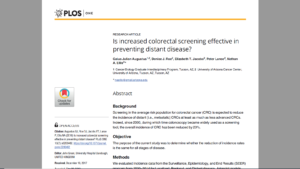