Colorectal cancer screening is recommended starting at 50 years old, and since Medicare coverage started in 2000, colonoscopy screening uptake has increased dramatically. This paper sought to look at colorectal cancer by stage (ie, early stage to late stage to metastatic) and determine how the incidence has changed from 2000 – 2014. Because colorectal cancer starts as a benign polyp and proceeds to cancer over the course of a decade or more, we considered most advanced cancers to have the most time to be detected. We, therefore, hypothesized that the incidence of late stage & metastatic cancers (ie, distant CRC) would be the most reduced over time. Unfortunately, we found that distant CRCs were the least reduced, and present possible explanations, such as the existence of a novel kind of colorectal cancer that advances much more rapidly than most.

This paper was conceived and conducted by me with the consultation of my advisor as well as a statistician and an epidemiologist. I did the experimental design, statistics, data visualizations, and writing.

Screening in the average risk population for colorectal cancer (CRC) is expected to reduce the incidence of distant (i.e., metastatic) CRCs at least as much as less advanced CRCs. Indeed, since 2000, during which time colonoscopy became widely used as a screening tool, the overall incidence of CRC has been reduced by 29%.

The purpose of the current study was to determine whether the reduction of incidence rates is the same for all stages of disease.

We evaluated incidence data from the Surveillance, Epidemiology, and End Results (SEER) program from 2000–2014 for Localized, Regional, and Distant disease. Joinpoint models were compared to assess parallelism of trends. Data were stratified by race, age, tumor location, and sex to determine whether these subgroupings could explain overall trends.

The slower decrease in the incidence rate of distant disease is not consistent with a screening effect, that is, CRC screening may not be effective in preventing many distant CRCs. As a consequence, distant CRCs represent an increasing fraction of all CRCs, accounting for 21% of all CRCs in 2014. The analysis indicates that inadequate screening does not explain the slower decrease in incidence of distant CRCs. Consequently, we suggest that a subtype of CRC exists that advances rapidly, evading detection because screening intervals are too long to prevent it. Microsatellite unstable tumors represent a known subtype that advances more rapidly, and we suggest that another rapidly advancing subtype very likely exists that is microsatellite stable. 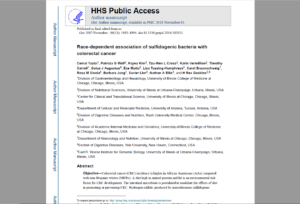